In the center of the city of Aachen was the annual theme day about cycling on the 14th of May 2022. This 'Aachener Fahrradtag' is an informative event and colourful festival. Which is completely dedicated to bicycles. The 2022 edition was well attended. Also due to the bright sunny spring weather. Numerous action areas and stands provided a cycling experience and information exchange on the subject of cycling.

Visit Zuid-Limburg was also present with an information stand. The Cycling Connects project was clearly promoted here. With a large roll-up banner and flyer in several languages. What a great result of interconnectedness on the subject of cycling! 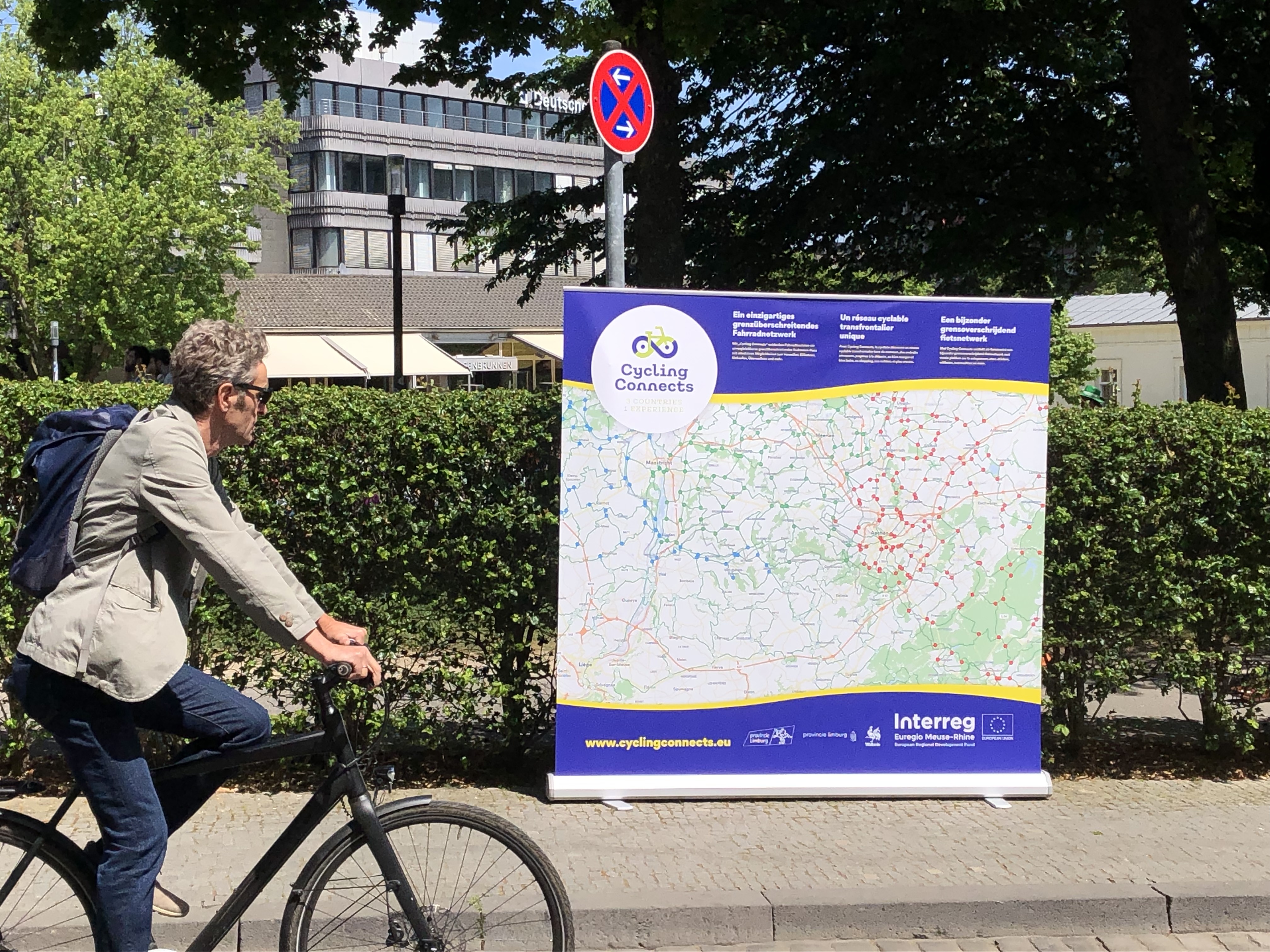 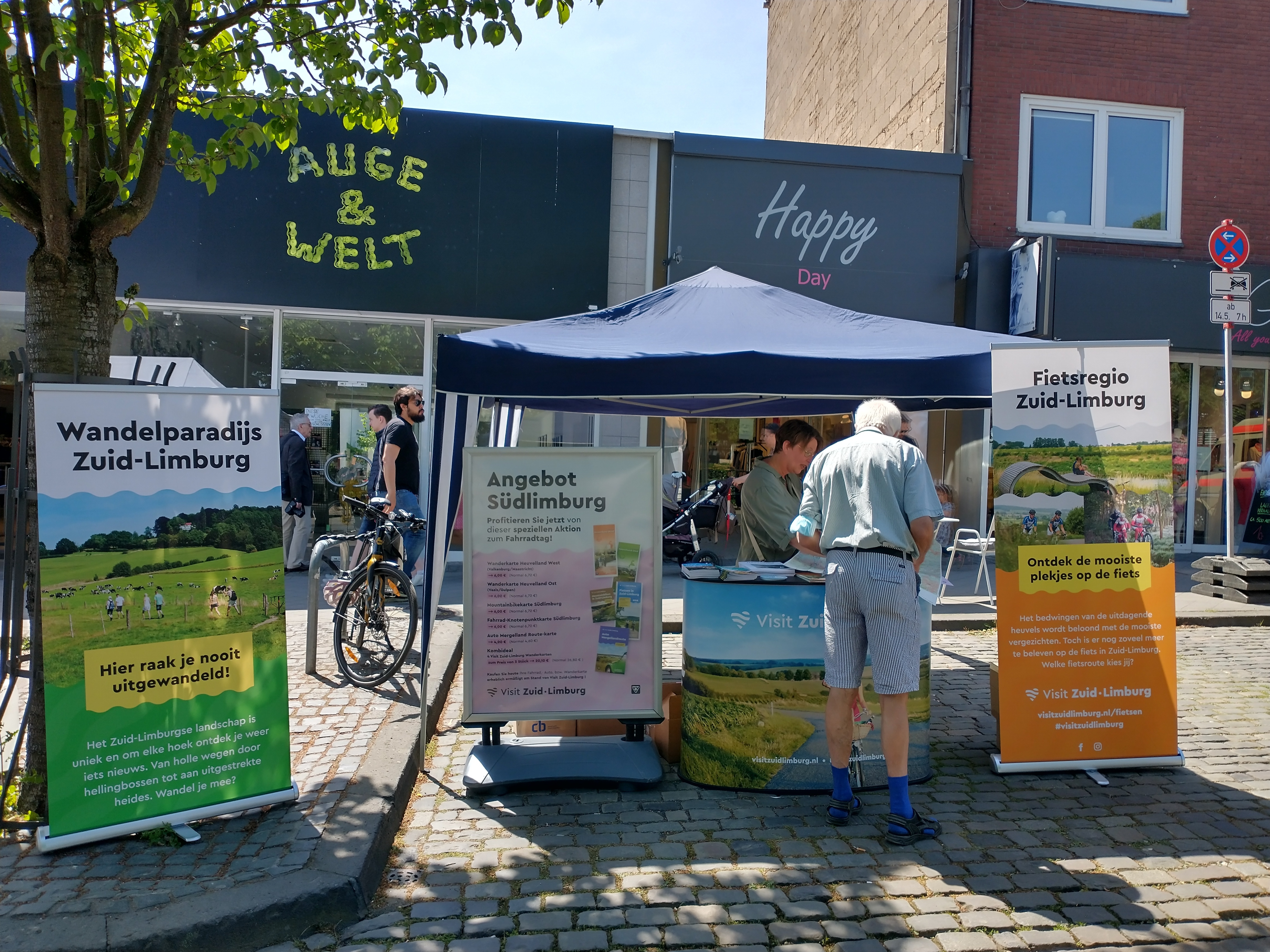 The adaptations to the Ravel Ligne 38 in Plombières, as part of the connection between Aachen and Liège, are now completely finished. With that, Cycling Connects has realized another element in its approach for the promotion of the cross-border cycling experience. 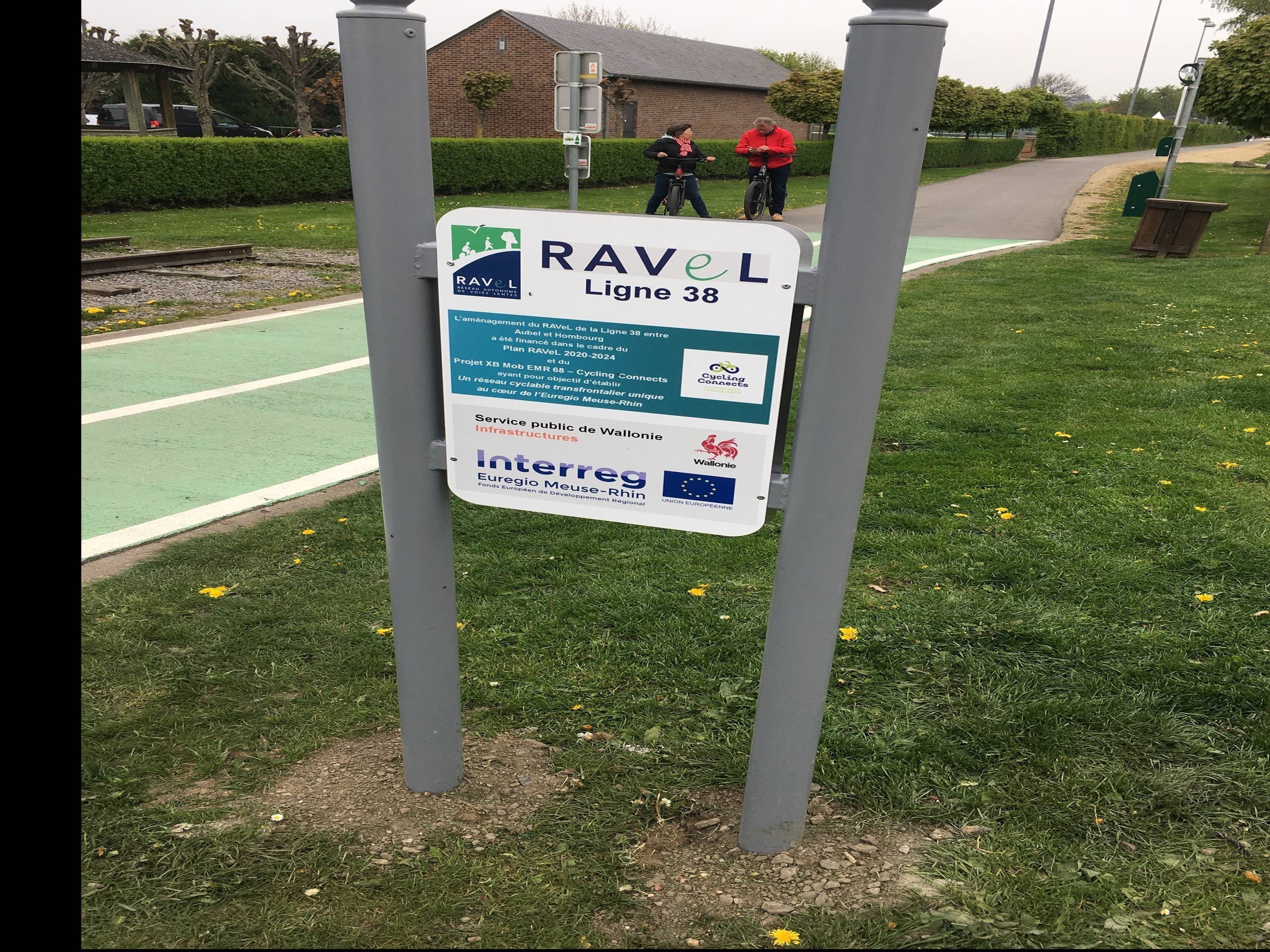 31 entries were received from 11 European countries. Wallonia was particularly honoured to be one of the entries. The RAVeL of Lines 38 and 39 was awarded the 1st prize for excellence in European greenways.

As a reminder, the RAVeL of Lines 38 and 39 links Liège to the Trois Frontières area, on the heights of Aachen, in 55 km. A safe green corridor in a dense urban environment in its first part, it crosses the entire Pays de Herve, passing through Chênée, Vaux-sous-Chèvrememont (Chaudfontaine), Beyne-Heusay, Fléron, Soumagne, Herve, Thimister-Clermont, Aubel and Plombières. It is also part of the international cycle route EuroVelo 3 and the regional cycle route W2. Used by all types of users and in all weathers, it allows people to travel to work, schools, shops and the Chênée station on a daily basis, as well as for leisure and tourist activities. This active mobility backbone is an example of sustainable infrastructure and of the collective and transversal work of all the players in the region: SPW M&I, municipalities, associations, citizens and other local players. This is a fine reward and recognition for all those who collaborate in its development, maintenance, enhancement and promotion, with the aim of achieving even greater benefits for mobility and tourism.

On 2 July 2021, the official opening took place of the new cycle paths of the so-called Ligne 38 between Aubel, Hombourg and Plombières and the Ligne 39 between Plombières, Gemmenich and the Drielandenpunt.
Unfortunately, this event was not public due to COVID restrictions.

This happening was attended by a small administrative representation from the Walloon municipalities involved, the Walloon Ministry of Mobility and the Municipality of Eijsden-Margraten.

The latter is the lead partner of the CyclingConnects project (also known under the project name XBMob), which is funded by the Interreg V programme Euregio Meuse-Rhine.

With this opening, the first two of in total seven infrastructural cycling projects within CyclingConnects have been realised.

A European Parliament study (Directorate General for Internal Policies – The European Cycle Network EuroVelo) has indicated that on a yearly basis there are 2,3 billion cycle tourism trips in Europe, of which 20,4 million include overnight stays and creating a total turnover of € 44 billion. In order to make use of this potential a partnership of 12 Dutch, Belgian and German organisations has developed the cross border project Cycling Connects in which they enforce the attractivity of cross border cycle tourism.

This will be realized through the connection of several cycle routes and nodes in the Euregion Maas-Rhine in an area which can roughly be covered by Lijn 50 (Maastricht-Aachen), the Vennbahn, the Ligne 38/Eurovelo5 and the Maas Cycle route (Eurovelo19).

These partners also work on a joint strategy and instruments which contribute to the increase of the cycle experience in the area. Elements such as convenience, good facilities, concrete (online) information and the development of new cycle-related products and services play an important role. The development will be taken up in collaboration with touristic organisations and entrepreneurs.

The finalisation of Cycling Connects is foreseen in 2022.

This project is co-funded by the European Union through the Interreg VB-programme Euregion Maas-Rhine. 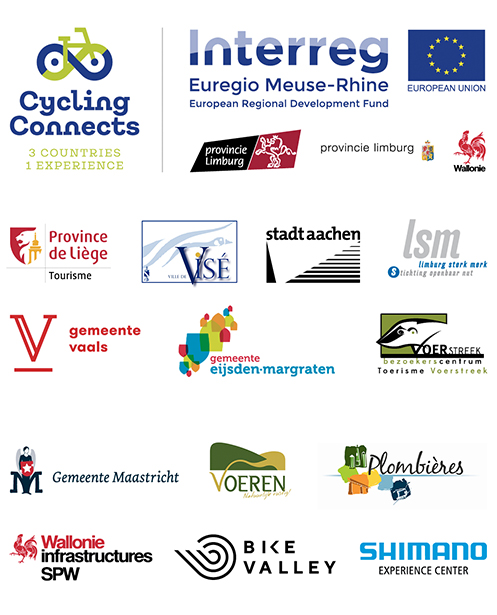